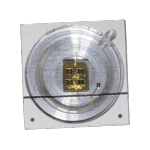 With the new UV-LED CUD8AF4D the manufacturer Seoul Viosys has introduced its next milestone in the UV-LED development and thus achieved an enormous performance leap in the short-wave UV spectrum.

In addition to the technical parameters, the price/performance ratio, which for the first time enables cost-efficient use in industrial applications, is particularly noteworthy.

Ultraviolet radiation in a wavelength range between 200nm and 280nm is highly effective for sterilisation applications. This is especially true for the disinfection of water, air and surfaces.