Rich in tradition and owner-managed, we have been one of the leading design-in distributors for electronic components and systems in the industrial and lighting sector for 70 years. Hardly any other company in the industry can draw on such depth of experience. Customized solutions, in-depth industry knowledge, individual consulting and a strong team that is always up to date and also likes to think outside the box are what set us apart. We are professionals from the product idea to series production. Complex processes are secured, seamless and coordinated and certified according to ISO 9001.

Whether lighting, optoelectronics, sensor technology, power supply, electromechanics, Hi-Rel, signal technology, circuit breakers or memory: Our claim as a design-in distributor always lies on individual consultation as well as finding targeted solutions and fitting products for our customers. Because only if our customers are 100% satisfied, we are also satisfied. 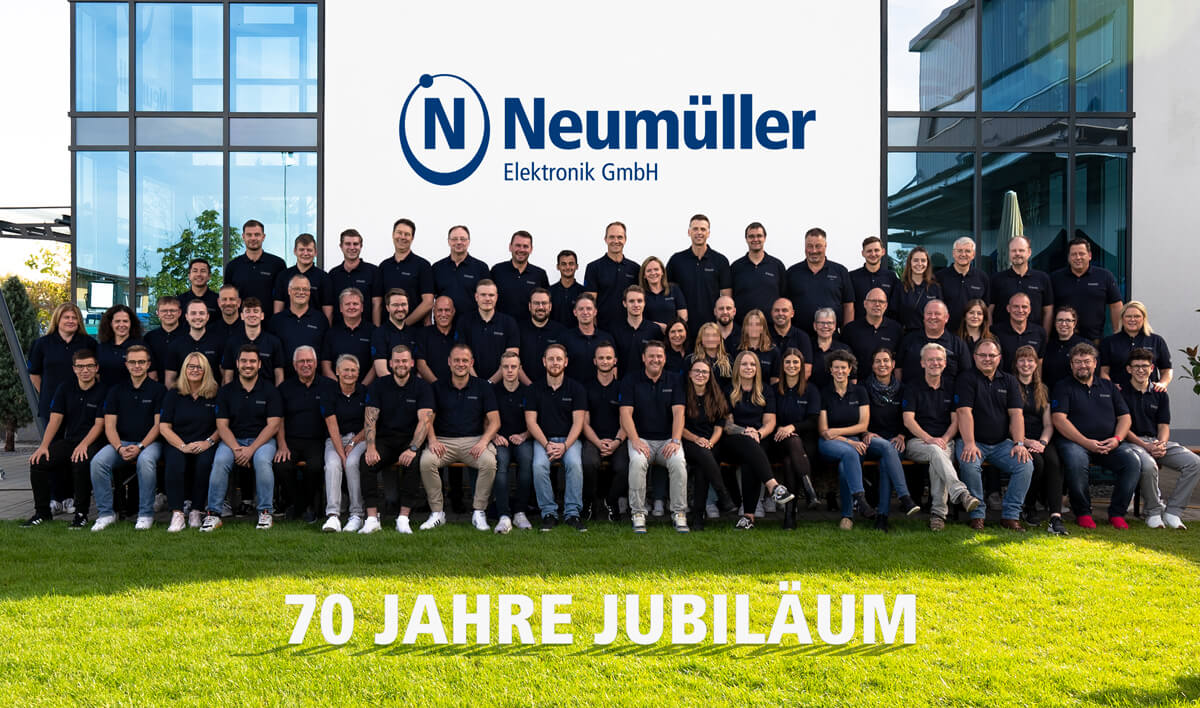 Successful together for decades

Company anniversaries are no longer a matter of course these days. This makes Neumüller Elektronik all the more proud to have employees with 10, 15, 20 and over 25 years of experience. Long-term employment relationships are not the exception but the rule with us. "The quality of our work is not least due to the experience and competence of our employees," says Uwe Fischer, Managing Director of Neumüller Elektronik GmbH. Their loyalty and cooperation contribute significantly to the success of Neumüller Elektronik.

Confidence, reliability and partnership are values that not only lie with Neumüller in its cooperation with manufacturers and customers, but also in its employees. Growing together, on tasks and challenges. Contributing to Neumüller's success together, surviving lows and celebrating highs. This is what distinguishes the Neumüller Elektronik team.

"Without such committed employees, we would not be where we are today," emphasizes Uwe Fischer. As a family-owned company with the highest standards of quality and customer satisfaction, our employees are our capital. Our company is characterized by team spirit, which is promoted by joint company events, company sports and in-house training.

As a market- and innovation-oriented distributor with a focus on the German-speaking region, our headquarters in Weisendorf, our branch office in Ahrensburg and our sales offices in Berlin, Munich and Dortmund not only offer direct customer proximity but also the best prerequisites for a fast, flexible response to all relevant changes in the market.

Globally networked, we work exclusively with renowned and leading manufacturers. 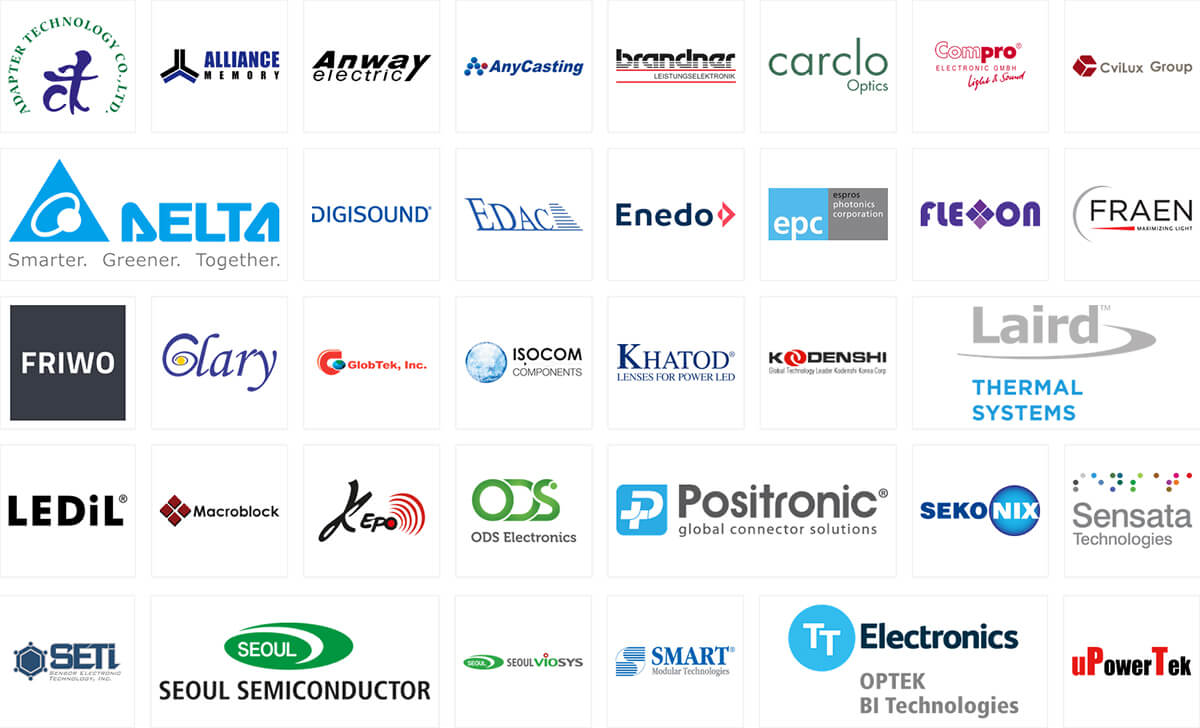 Reflects the enthusiasm and passion of all employees, without whom Neumüller would not exist today.

The experience and technical expertise of the employees. What distinguishes Neumüller? Of course, the decades of experience of many employees.

Reliability; signals not only economic security, but also partnership, trust and a long-term approach. In other words, the values for which Neumüller has always stood.

As a long established and owner-operated company, we always act according to the features reliability and liability, honesty and transparency as well as flexibility and discretion. Customer satisfaction and trust and commercial added value are the basis for our successful cooperation.

We put the strength on working together exclusively with well-respected and leading manufacturers and supplier. We achieve confidence and consistency on the market since more than 60 years. We do implement your demand on product quality and availability.

The certification according to DIN EN ISO 9001:2015 proves the uniform representation of our processes. All procedures and workflow are location- and department-overall recorded. This guarantees you as our value customer a maximum of safety and transparency in the complete process chain.

High competence in consultation and solution

We confirm the confidence of our customers by fulfilling and exceeding their expectations. Our competence of individual consulting and target-oriented solutions are reflected in our custom-fit products. Have a look by yourself!

2022
Warehouse expansion in Weisendorf.
Eröffnung eines neuen Vertriebsbüros in Berlin.
2020
2019
Tanja Hollfelder is appointed authorized signatory and a new sales office is opened in Linz/Austria.
Neumüller Elektronik is once again a 100% family-owned company. Opening of a new sales office in Dortmund.
2017
2016
PowerSale:
Lighting: LED components / LED modules and systems
Industry: optoelectronics/sensors; power supply, connectors/cable assembly, UV LED
Focus and split of sales on Industry and Lighting.
2015
2014
Implementation of a new ERP system
Office north near Hamburg gets a new constructed warehouse.
2013
2012
Uwe Fischer becomes second general manager.
New constructed Headquarter by Nuremberg. Logistic and management are now based in the new headquarter.
2009
2008
New constructed office near Hamburg including a light laboratory and an LED competence center.
Renamed to Neumüller Elektronik GmbH
2005
2002
Transfer in new business and logistic location Markt Schwaben, Munich.
New location opened by Stuttgart.
2001
1999
Takeover of the business shares by senior employees and transfer to an owner-managed private company. Norbert Hielscher and Oliver Kafka are appointed as authorized signatories. Opening of the branch office near Hamburg.
Acquisition of the "Components" distribution division of Neumüller GmbH by Fenner AG. Change of name to Neumüller Fenner Elektronik GmbH with registered office in Switzerland/Basel. The business purpose changes to: Trade in electronic components and provision of services and engineering in the field of electronics.
1993
1977
Relocation to Taufkirchen, Munich
Takeover by Max Eberle
1975
1960
Willi Bacher takes over the company with the same business purpose.
Foundation of Neumüller GmbH in Munich by Mr. Anzengruber with the business purpose: distribution of electrical and electronic goods of all kinds
1952
4%%A
Terms & Conditions | Imprint | Privacy Statement | Cookie details and settings | Logos
4%%E
7%%A
7%%E