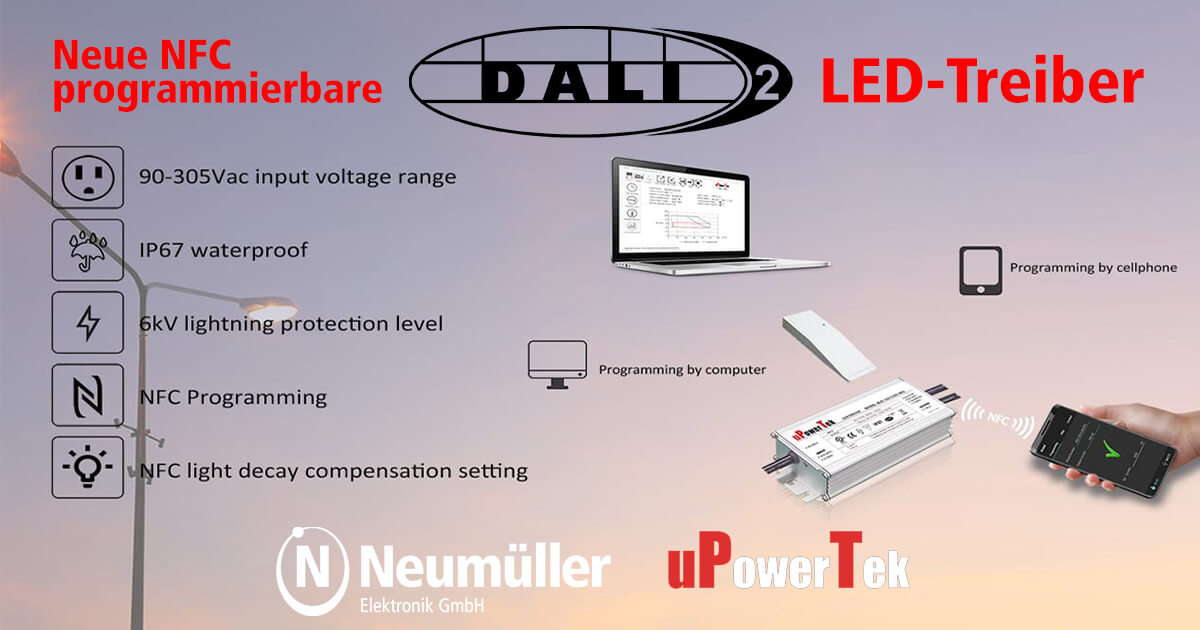 The company uPowerTek has developed a new generation of its LED driver series BLD and TLD with 40W to 800W, with DALI-2 interface as well as with NFC programming function. The new products comply with the latest DALI-2 standard, whose compatibility has been significantly improved compared to DALI-1 drivers. The NFC programming function is also available in this new series, and users can program the output current and other functions via an NFC programming device or smartphone with NFC communication.

The DALI-2 standard, the latest version of the IEC 62386 standard for DALI technology, is managed by the Digital Illumination Interface Alliance (DiiA), which certifies products that carry the DALI-2 logo and comply with the standard's protocols. While DALI-1 revolutionized artificial lighting control options, DALI-2 helps fill the gaps in the original standard. DALI-2 enables better interoperability with other wireless protocols such as Bluetooth, Wi-Fi and ZigBee. It also adds a host of new features that were not previously available. Other benefits include more energy-efficient lighting, easier customization, lower installation costs, and high reliability for outdoor applications.

The new-generation NFC-programmable DALI-2 LED drivers have a wide input voltage range of 90-305 VAC or 180-528 VAC, a waterproof IP67 enclosure, and 10-kV surge protection that ensures reliability for outdoor applications. By using branded capacitors (NCC and RUBYCON), a product life of 100K hours is achieved. This series further has an auxiliary voltage of 12V to 300mA. This can be used to supply power to intelligent controllers or sensors.

To the LED drivers from uPowerTek.