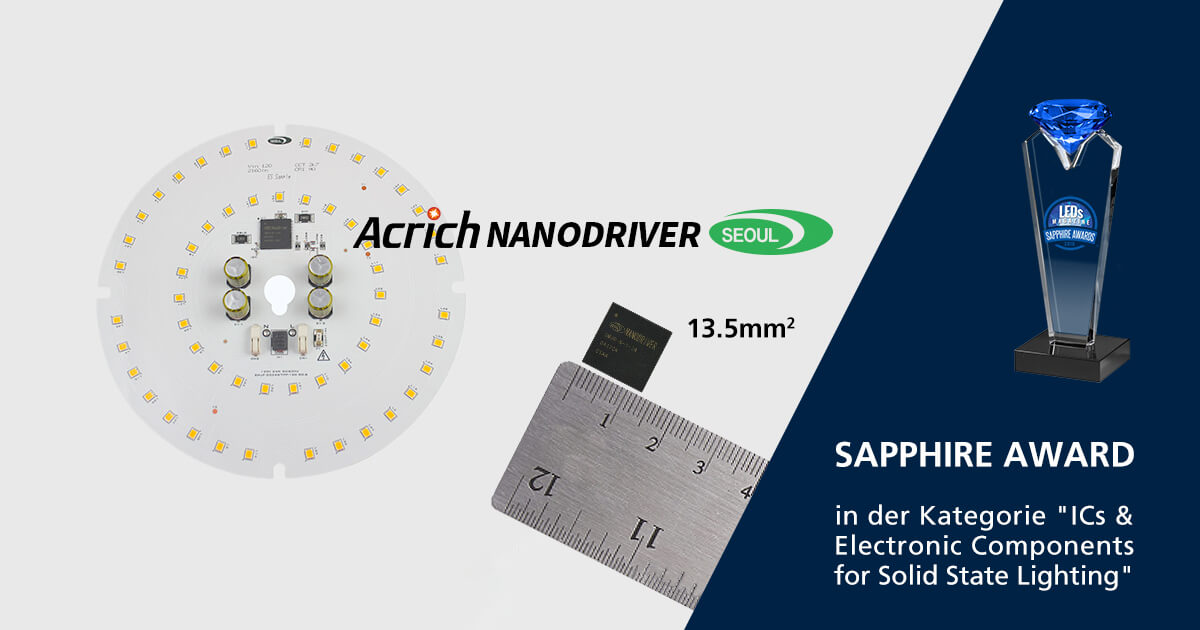 Seoul Semiconductor, one of the world's leading innovators and manufacturers of LED products and technologies, has been awarded the 2019 LEDs Magazine Sapphire Award in the category "ICs & Electronic Components for Solid State Lighting" for its Acrich NanoDriver series (ultra miniature LED drivers). The Sapphire Award is presented annually at Strategies in Light by LEDs Magazine, one of the leading magazines in the lighting industry.

Seoul Semiconductor's Acrich NanoDriver series of advanced LED drivers features smaller size, high efficiency and high power density. Compared to conventional LED drivers, the NanoDrivers achieve up to 10 times higher power density and can reduce the use of additional components by up to 30%. The devices of the Acrich NanoDriver series are the smallest miniature LED drivers in the world with 13.5mm2. They can be dimmed by phase cut or phase control as well as an analog signal.

The LED drivers are UL-approved and meet the requirements of California Title 24. Furthermore, the nanodrivers enable the implementation of the highest design requirements through very low flickering - nearly flicker-free operation -, a low inrush current and EMC according to Class B.

"The new NanoDriver series is a turning point for lighting designers as they can reduce the size, weight and volume of their luminaires," said Nam Ki-bum, Sales Executive Vice President at Seoul Semiconductor. "This breakthrough in size reduction for the Acrich NanoDriver series is the result of the company's continued investment in high-voltage LED technology, combined with a unique performance topology that results in smaller size, higher efficiency and lower costs.

"With these LED drivers, we are targeting designers of small and medium size under 24W lights such as light bulbs, filaments, fluorescent tubes and downlights. We expect the global market to be worth approximately $3 billion. Seoul Semiconductor will meet current and future market requirements with the patented Acrich NanoDriver technology," adds Nam.

The NanoDrivers from Seoul Semiconductor are available with a maximum output power of 16W or 24W and an input voltage of 120VAC or 230Vac directly from Neumüller Elektronik.